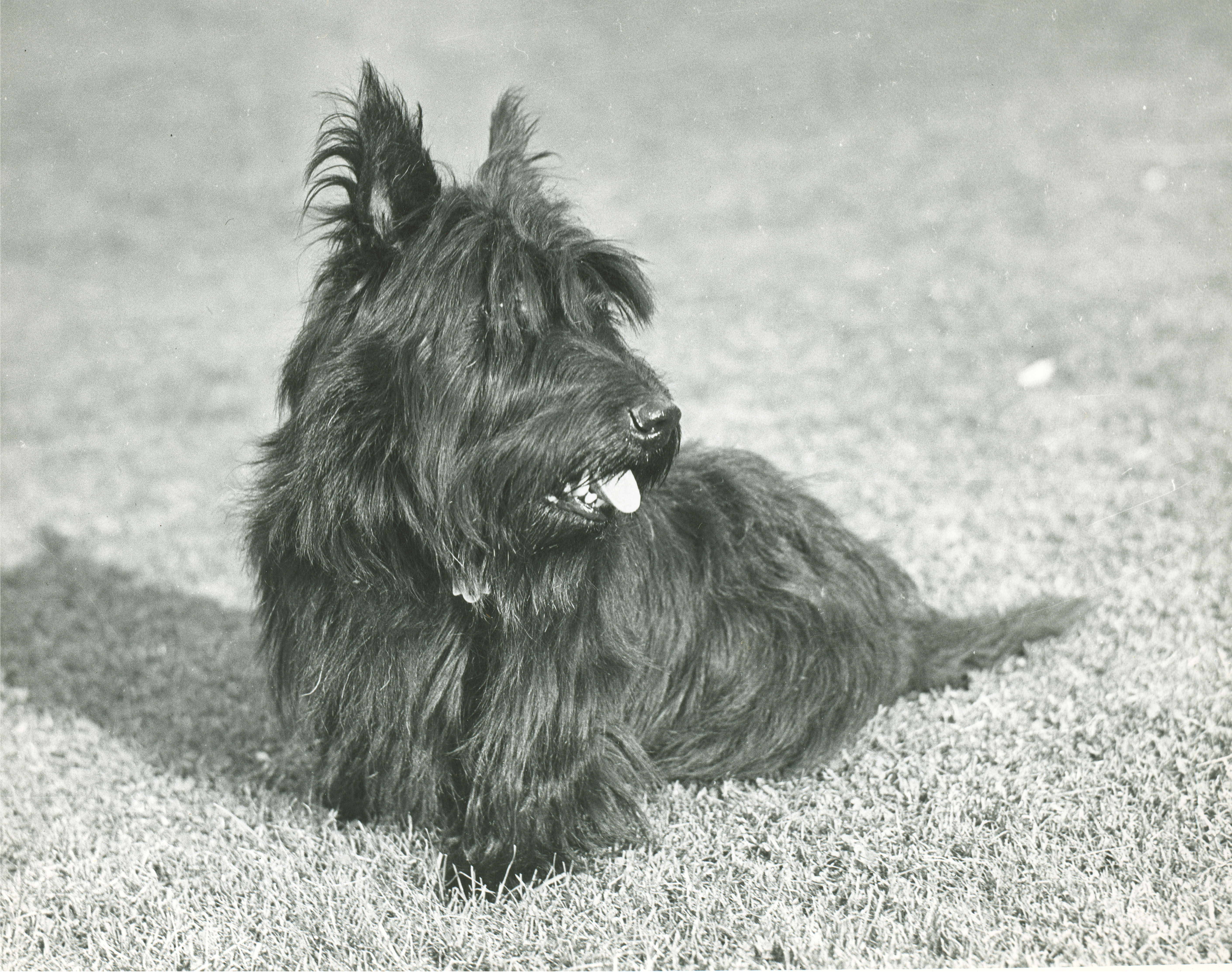 Fala is without doubt the most endearing and adorable character in the drama that was the Roosevelt White House during World War Two. The little Scottish Terrier was given to President Roosevelt as an early Christmas gift by his cousin and “closest companion” Margaret ‘Daisy’ Suckley in November, 1940. 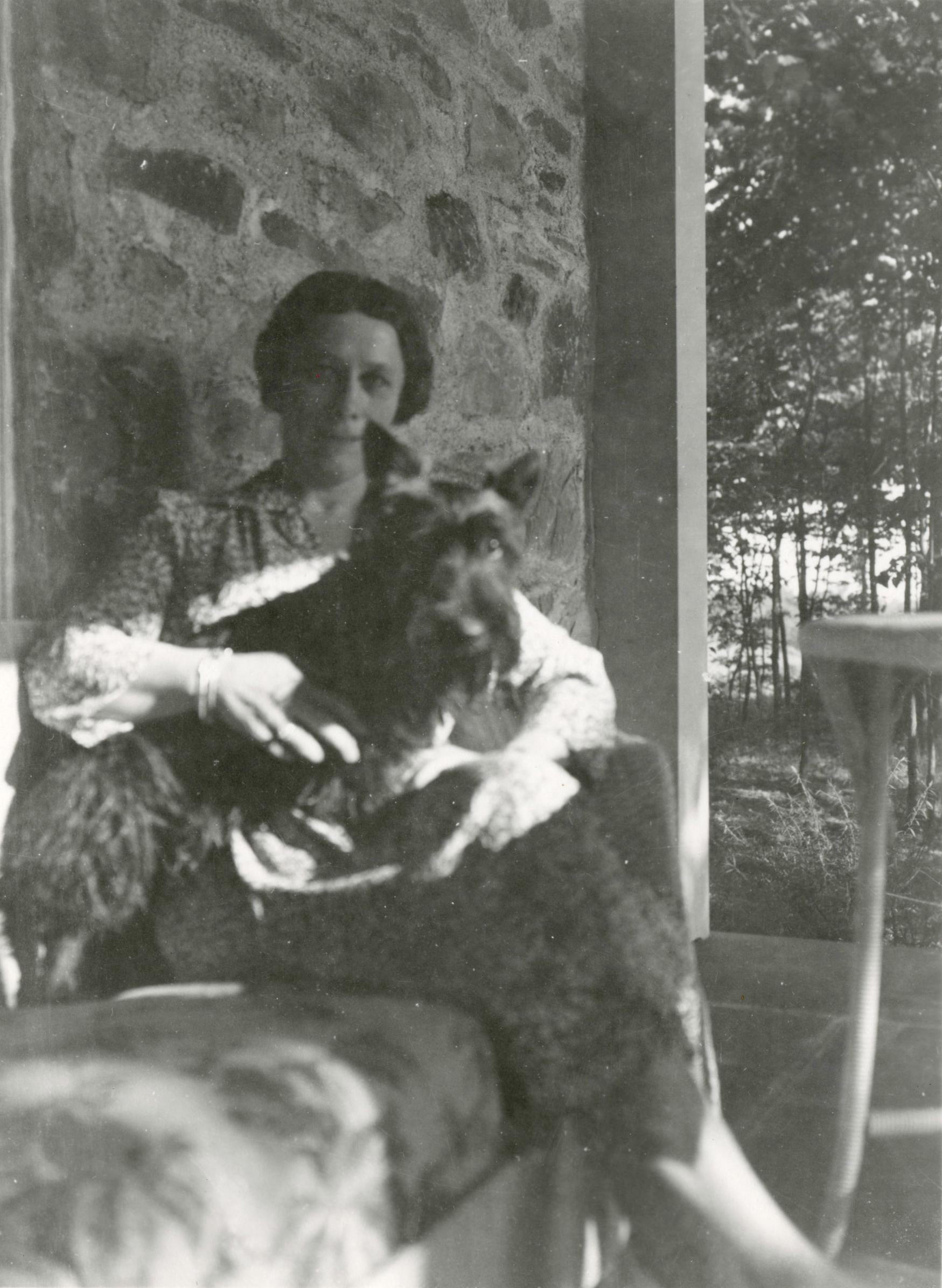 FDR named him after a Scottish ancestor, the “outlaw” John Murray of Falahill. This was soon shortened to Fala and like his outlaw namesake his legend grew.

Immediately popular with both the press and the public, Fala’s antics received extensive media coverage, including a role in an MGM film about life at the White House.

Fala traveled with FDR extensively, but his most mysterious and controversial voyage took place in 1944 and led to one of the most famous campaign speeches in American political history. Thanks to a recent donation to the Library we now have a first person account from U.S. Navy seaman Douglas MacVane who was serving on the USS Baltimore.

The Case of the Dog Who Didn’t Bark on the Boat – begins in the summer of 1944. After supporting the attack on Iwo Jima, the USS Baltimore steamed at full speed back to Pearl Harbor under a cloak of utmost secrecy. It then traveled to San Francisco for highly secret modifications, and then on to San Diego. Finally on the evening of July 22 there was a surge of activity – and President Roosevelt came on board amidst much pomp and circumstance. He was accompanied by his faithful Scotty Fala.

This was the start of an historic voyage shrouded in secrecy but intended to generate an enormous amount of press. FDR was going to Hawaii to meet with Gen. Douglas MacArthur and Admiral Chester Nimitz, the two men responsible for the war in the Pacific. It was also just a few months before the Presidential election, and FDR wanted to show the voters that he was up to the challenge of an unprecedented fourth term in office.

On the voyage to Pearl Harbor FDR spent most of his time resting in his quarters. According to FDR’s speechwriter Sam Rosenman, who was with him, “Fala like his master, loved people: and would quickly begin to fraternize in almost any company. It was his custom, as soon as he was permitted on deck in the morning, to scamper forward and find his way below to the seamen’s quarters. This was not just natural curiosity. He had learned quickly that little scraps of delicacies would be fed to him on these forays below. “

Douglas MacVane notes that “My only distraction during this time was occasionally sighting the President’s dog Fala. It was he who was causing the stir and getting all the attention now.”

It seems that the ‘walking officer’ assigned to keep track of Fala had been distracted and lost track of the celebrity canine. MacVane says that after much searching “Fala was located at one of the deck division’s gear lockers. He was missing numerous curly fur ringlets, of which he fortunately had an abundance.”

Sam Rosenman provided some additional details. “One day a sailor got the idea that his younger brother back home would be pleased to receive a small lock of the famous dog’s hair. With his scissors, he snipped off a little bit of Fala’s shaggy black coat. Other sailors had little brothers too, and followed suit.” 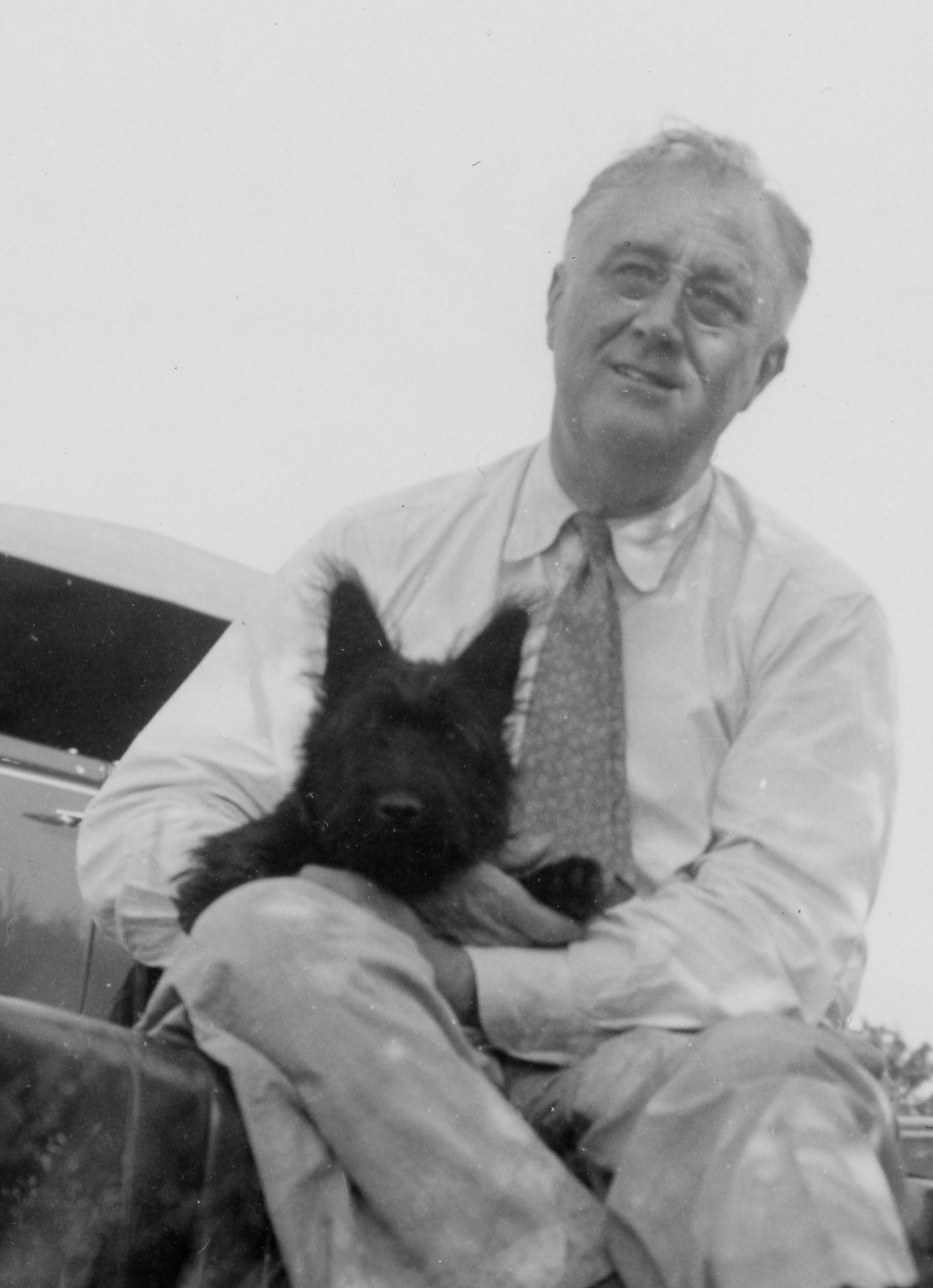 Needless to say President Roosevelt was not amused, and strict instructions were given to the crew to “confine their demonstrations of affection to petting.” But the mystery remains, why Fala never barked when he was dognapped and shorn of his luxurious mane. But this is not the end of Fala’s adventures.

Upon arrival in Hawaii, FDR met with MacArthur and Nimitz and agreed on their plans to launch a two pronged attack, Gen. MacArthur’s forces retaking the Philippines and striking Japan from the south, and Adm. Nimitz and the Navy continuing to island hop across the mid-Pacific and pressure Japan from the east. 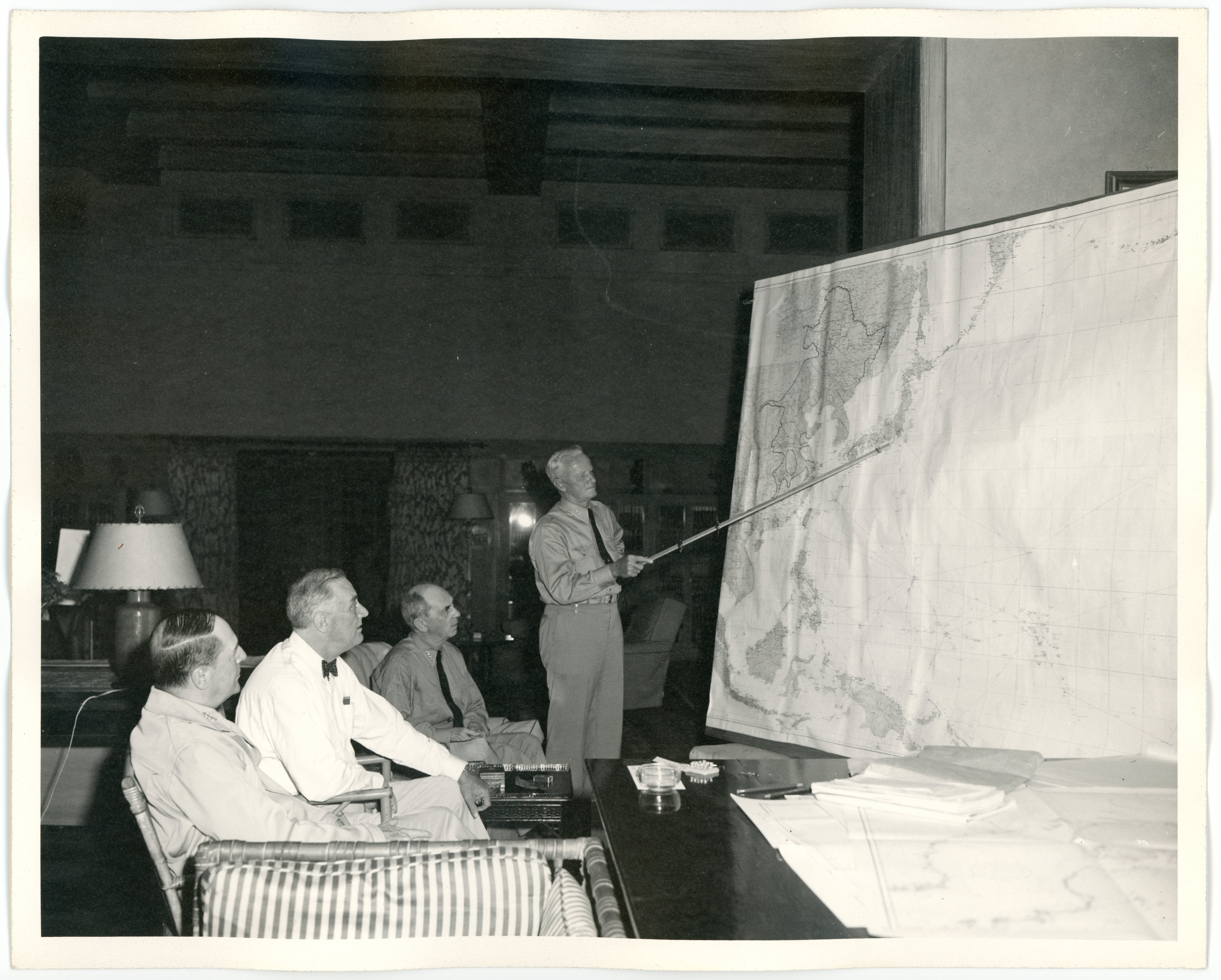 FDR left Hawaii aboard the Baltimore on July 29th headed for the Aleutian Islands off of Alaska. Several of the more remote Aleutian Islands had been captured by the Japanese earlier in the war and FDR wanted to assert American control.  He went fishing and met with local leaders and then headed back to the mainland landing in Seattle then taking a train back to Washington.

It is unclear exactly how the rumor got started, but Rep. Harold Knutson (R) Minnesota, announced on the floor of the House of Representatives that he had heard that Fala had been left behind in the Aleutians and that a destroyer had to be sent from Seattle to pick him up. He complained of the waste of taxpayer money and accused the President of spending $20 million on his Pacific excursion.

The following day the Democratic House Majority Leader John McCormack denied the reports and quoted Admiral Leahy as saying “the story about Fala, the president’s dog, is made out of whole cloth. The dog was never lost. “The following week on Sept. 12th, Knutson accused the President of sending a plane to pick up Fala. This was also denied by the Navy and the White House. Fala was big news for weeks. 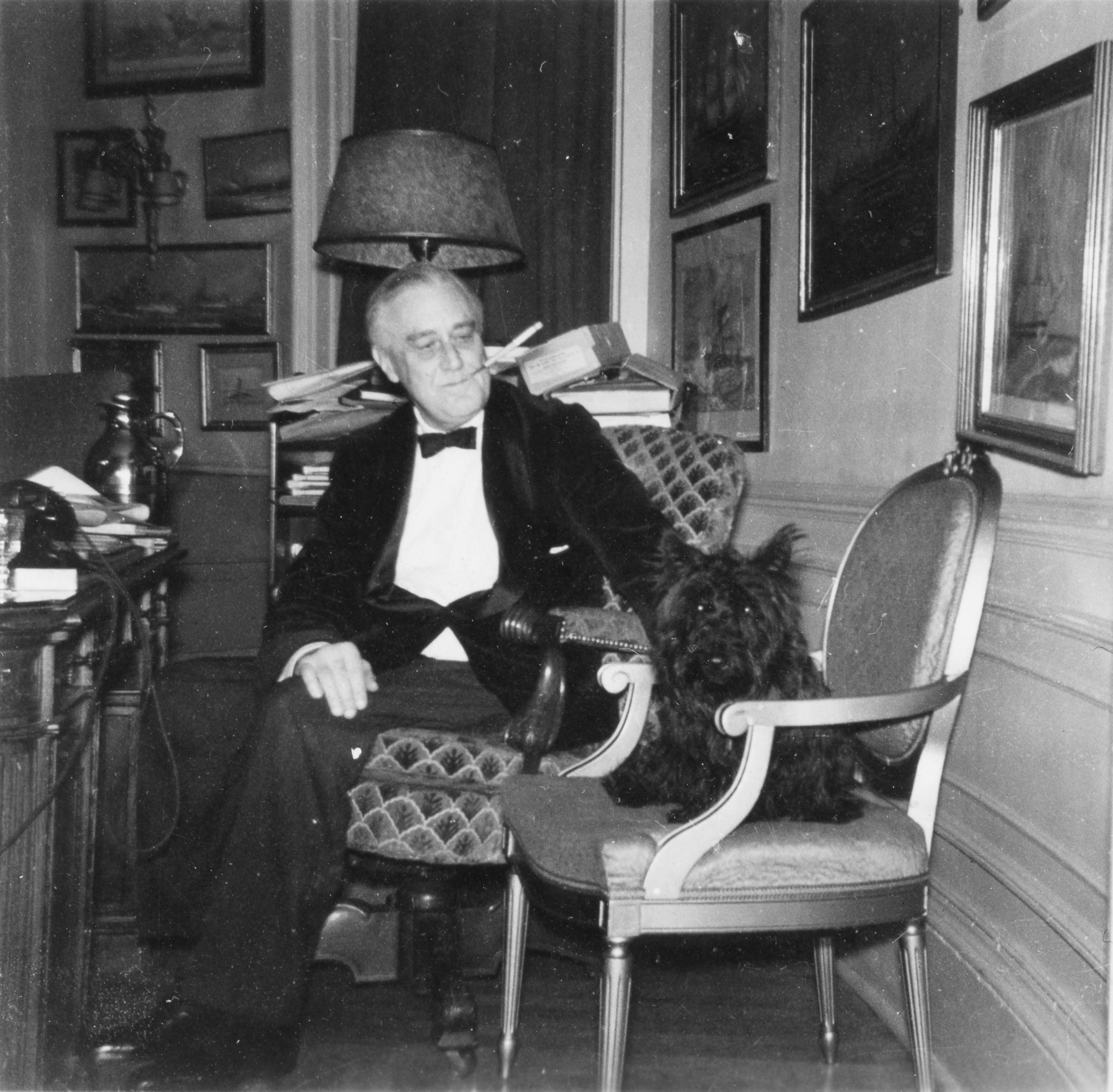 On September 23rd FDR gave his first official campaign speech at a Teamster’s dinner in Washington D.C. It has come to be known as the Fala speech and is a fitting end to Fala’s adventure. You can see FDR’s reading copy of the speech here

Speaking to a national radio audience of millions, FDR pulled no punches.

“These Republican leaders have not been content to make personal attacks upon me – or my wife or my sons – they now include my little dog Fala. Unlike the members of my family, Fala resents this. When he learned that the Republican fiction writers had concocted a story that I had left him behind on an Aleutian Island and had sent a destroyer back to find him – at a cost to the taxpayer of two or three or twenty million dollars – his Scottish soul was furious! He has not been the same dog since. “

The speech was a spectacular success and some historians credit it with turning the election in FDR’s favor. It certainly reassured the electorate that the old FDR still had some fight in him, and he was re-elected once again.

Fala was as devoted to his master as FDR was to him. After FDR died in April, 1945, Fala went to live with Mrs. Roosevelt. He is buried next to Franklin and Eleanor Roosevelt here at the home and Library in Hyde Park.  Fala is also immortalized at the Franklin D. Roosevelt Memorial in Washington D.C. and will live forever in the hearts of dog lovers everywhere.