It was the worst day of his presidency, the worst day of his life – and the worst military defeat in American history. President Franklin Roosevelt’s beloved Navy lay in smoking ruins in Pearl Harbor, as the Japanese Empire launched well-coordinated attacks across a 4,000 mile front. The Nazis controlled Europe and North Africa. Britain and Russia were on the verge of collapse. 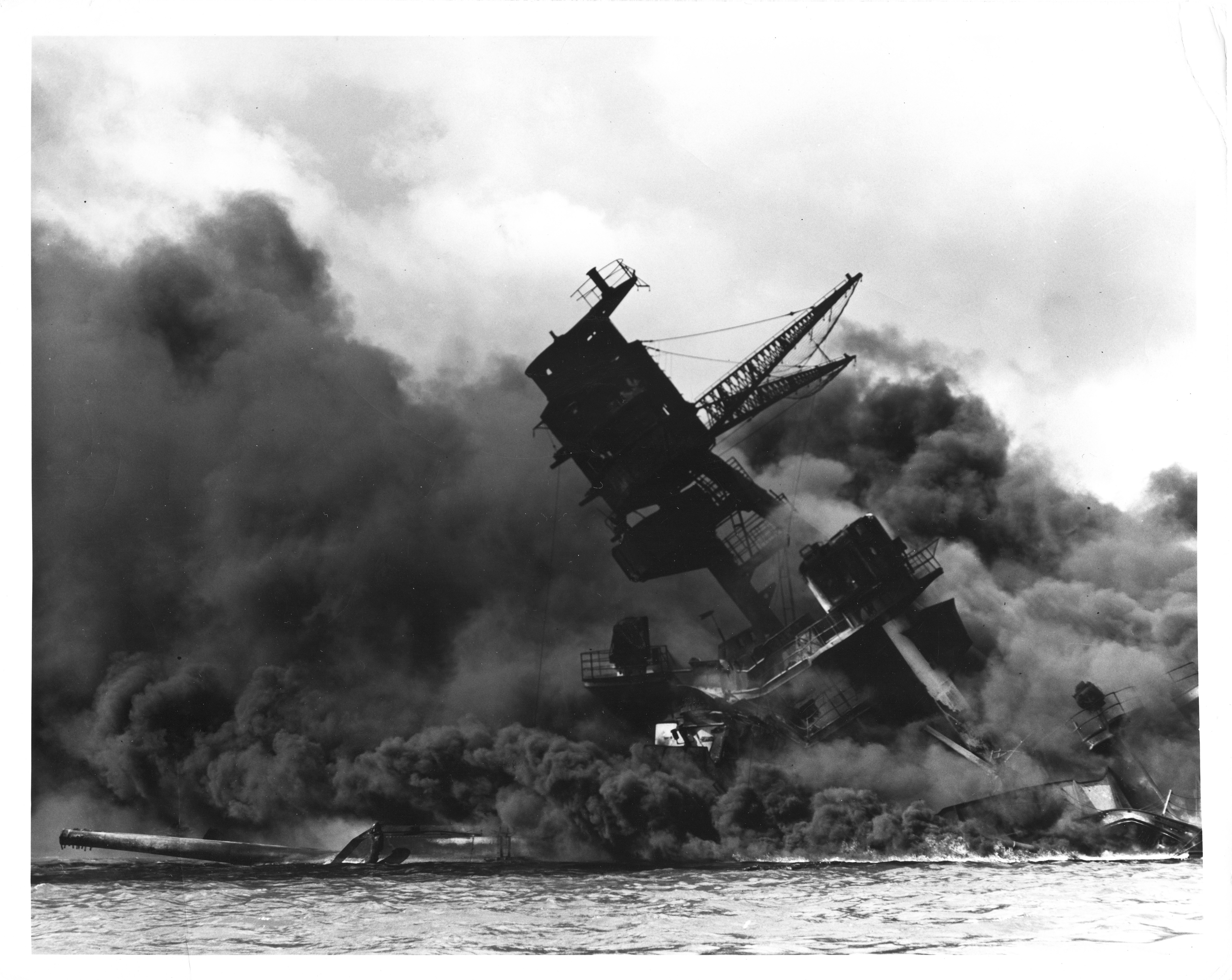 But as the smoke cleared from the mangled wreckage, it revealed a truly great leader. Franklin Roosevelt took the weight of the free world on his paralyzed legs and carried America into the future – away from our isolationist past and into the age of the global superpower.

“With confidence in our armed forces – with the unbounding determination of our people – we will gain the inevitable triumph – so help us God.”

The speech was short, just under seven minutes long. It expressed his outrage, his sense of betrayal, and his complete confidence that in the end the United States would avenge this treachery.

In some ways he had been preparing for this moment for years – since Germany invaded Poland in September 1939. Faced with an American citizenry, and a congress, strongly opposed to getting involved with the European war – President Roosevelt knew he had to wait for public opinion to turn in his favor before he could act. He was brilliant in his careful calibration of action, first providing moral support for England and the Allies, then providing military equipment, trading British Naval bases for old destroyers, and shipping tanks and planes under the Lend Lease program. The American public did not fully understand the threat against our democracy.  Through incentives and a little arm twisting he had transformed America’s industrial might into the arsenal of democracy. 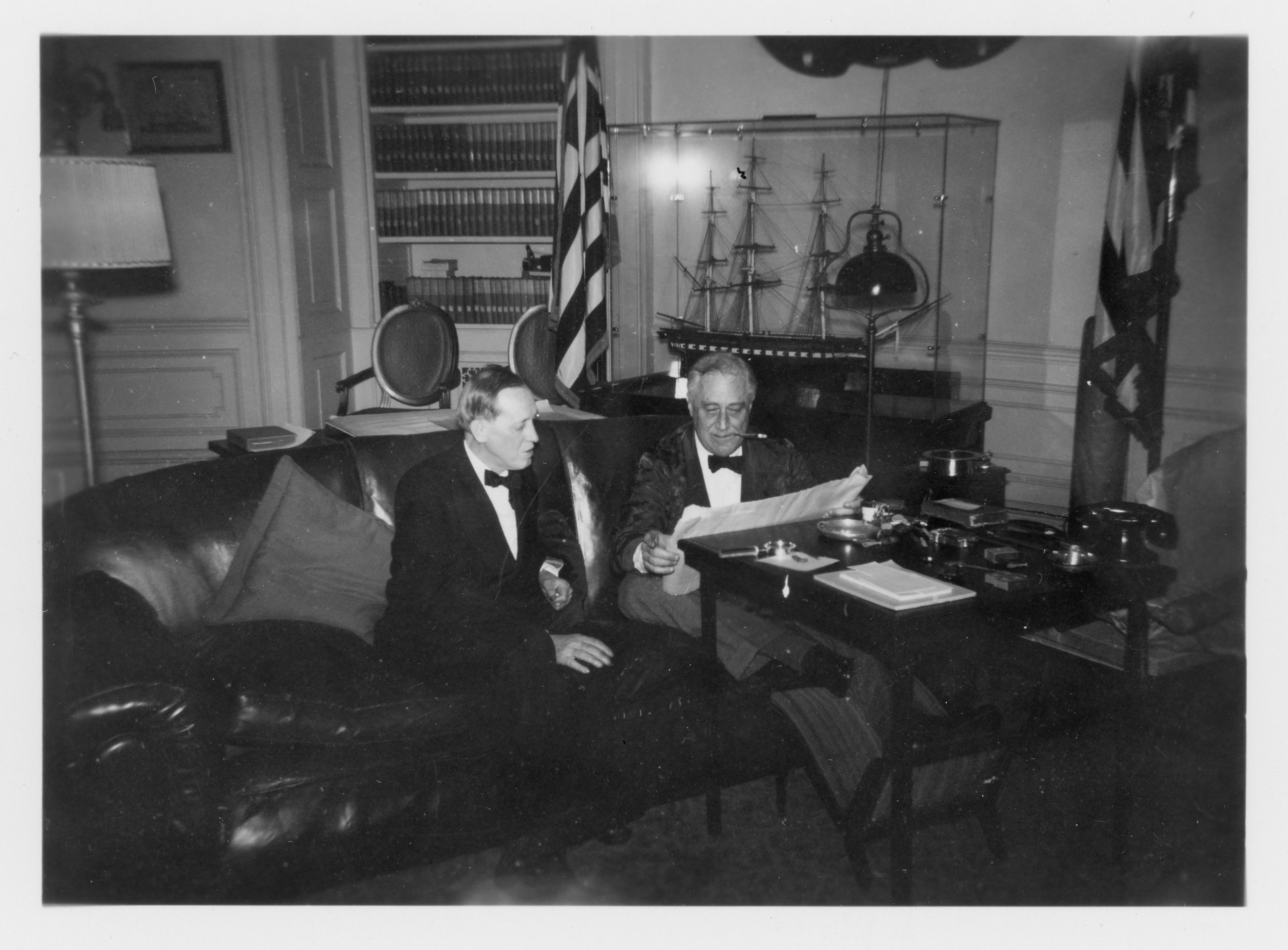 That terrible day began innocently enough. Franklin Roosevelt was in the Oval Study on the second floor of the White House with his closest advisor Harry Hopkins, who was there because he lived in the White House. All of the other staff were off and Mrs. Roosevelt was hosting a luncheon. FDR was working on his stamp collection at 1:47 pm when the phone rang. It was Frank Knox, Secretary of the Navy calling to say the Japanese were bombing Pearl Harbor.  FDR exclaimed “NO!” in a loud voice and a startled Hopkins jumped to his feet.

They immediately began calling the inner circle; Secretary of War Henry Stimson; FDR’s private secretaries Marvin McIntyre and Grace Tully; press secretary Steve Early; and the top military advisors. The first meeting began a little after 3 pm, with just FDR’s closest confidants. As the meeting progressed more and more reports came in, reports that began to paint a picture of the devastating destruction that had rained down on the Pacific Fleet.   Despite the sense of shock and loss, FDR was focused and deliberate.  Mrs. Roosevelt described him as having a “deadly calm.” 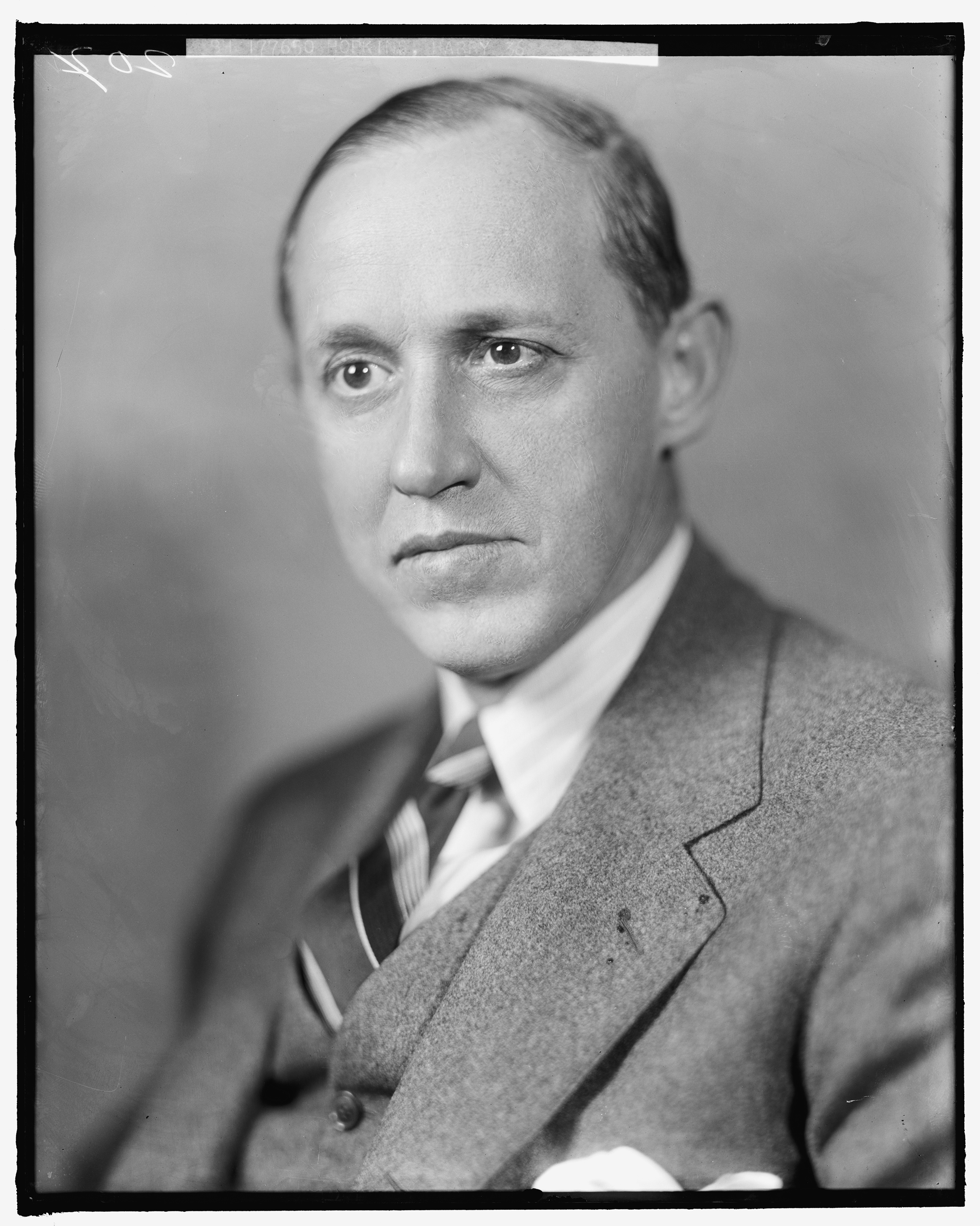 Harry Hopkins described the scene in his diary, and wrote about one issue that would come back again and again. The president was going to speak to congress, and the world, the next day and he wanted to give a short and powerful statement. The Secretary of State, Cordell Hull, argued for a longer, detailed presentation of Japan’s many transgressions. Hopkins noted:

FDR’s great leadership is perhaps best illustrated by his approach to this speech. For it was much more than merely an address to congress. It needed to be a statement to the world – a battle cry for freedom – an unquestioned call to arms.

The meeting broke up around 4:15 pm.  After everyone had left, FDR called Grace Tully into the Oval Study. He was smoking a cigarette as she came in.

Ms. Tully described the scene in her memoir: 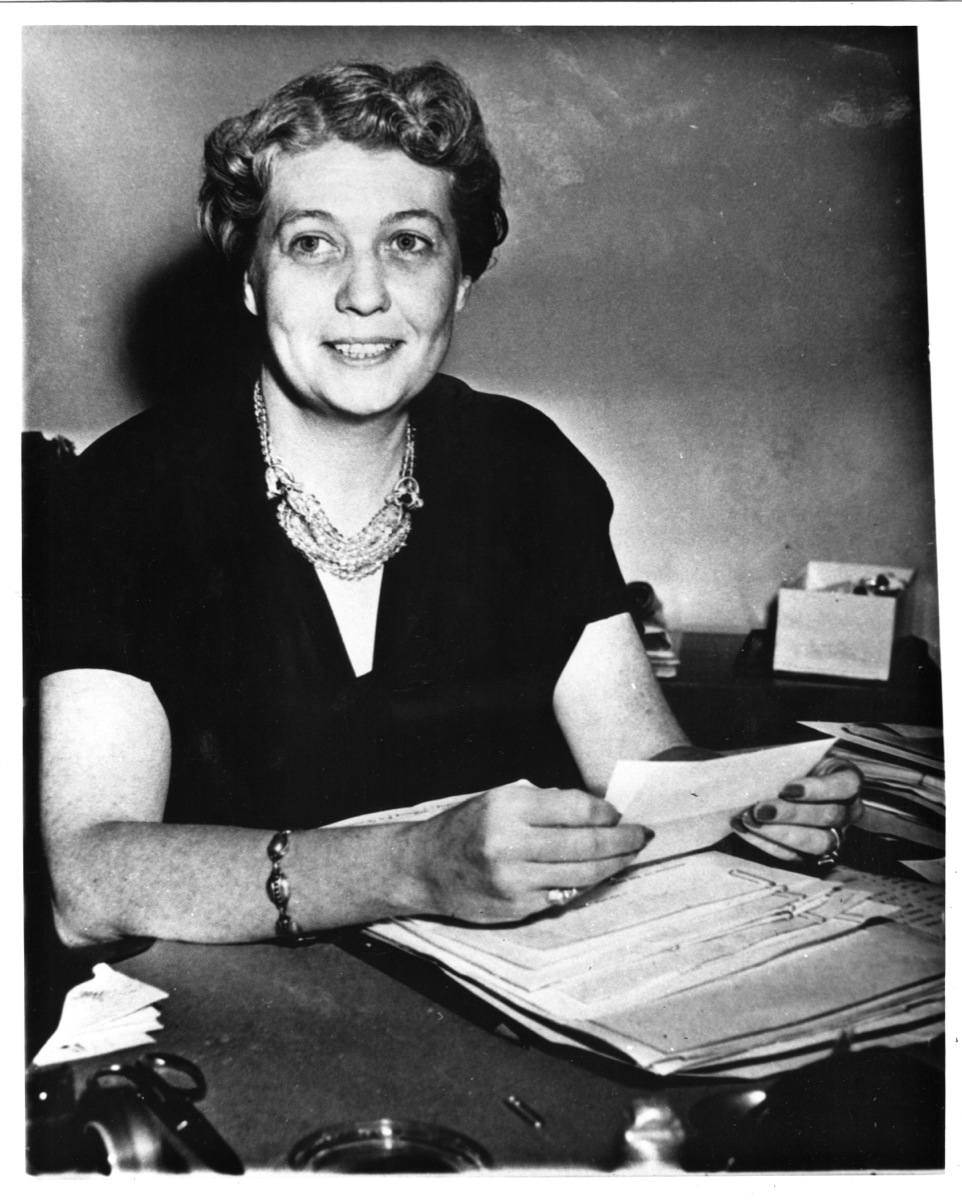 He took a deep drag and addressed me calmly. ‘Sit down, Grace. I’m going before Congress tomorrow. I’d like to dictate my message. It will be short.’ I sat down without a word; it was no time for words other than those to become part of the war effort. Once more he inhaled deeply, then he began in the same calm tone in which he dictated his mail. Only his diction was a little different as he spoke each word incisively and slowly, carefully specifying each punctuation mark and paragraph. The entire message ran under 500 words, a cold-blooded indictment of Japanese treachery and aggression, delivered to me without hesitation, interruption or second thoughts.”

Grace typed up the speech and gave it to FDR. He made a series of edits, including perhaps the most famous edit of any Presidential speech  – changing the words “world history” to “infamy.” 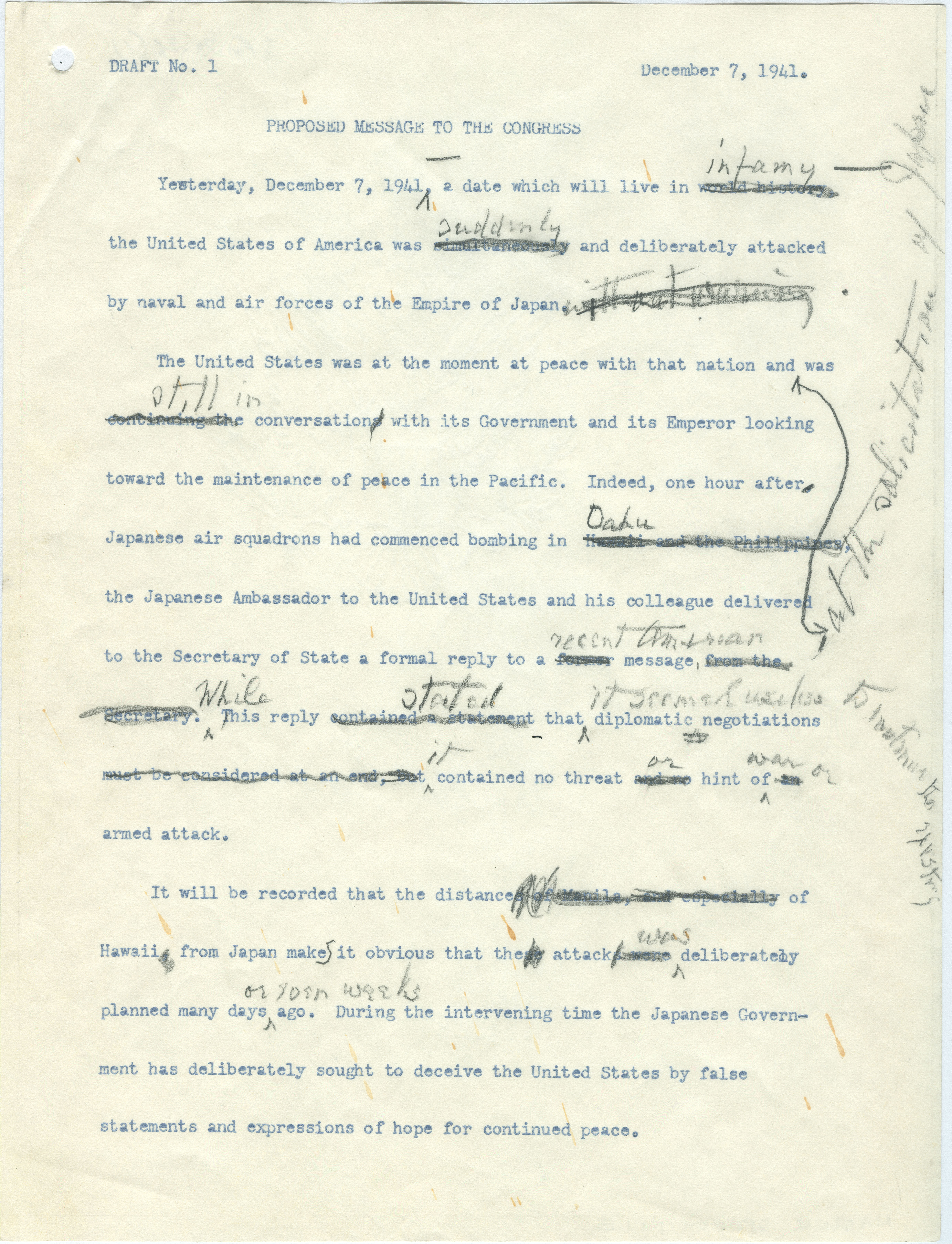 The president kept this copy of the speech with him the rest of the day, making small changes here and there. The final version is just 25 sentences, about twice as long as Lincoln’s Gettysburg Address. It is an extraordinary document in its clarity of purpose and muscular structure. There are no wasted words. It is sharp and pointed – like a bayonet aimed at the heart of an enemy combatant. 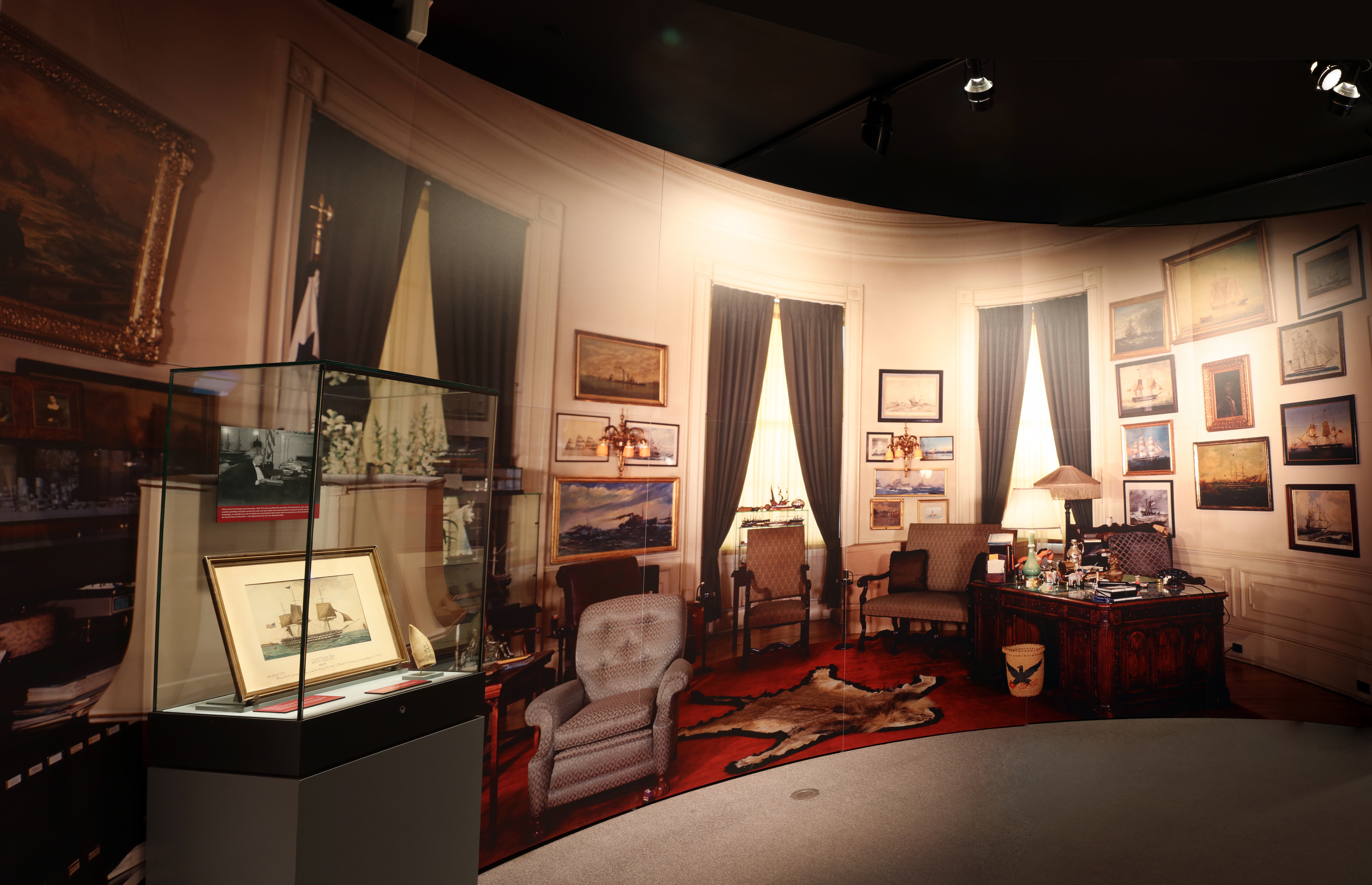 At 8:40 pm, FDR sat behind his desk in the Oval Study, his cabinet arrayed around him in a semi-circle. He told them this was the most important cabinet meeting since the bombardment of Fort Sumter and the start of the Civil War. Like Lincoln, FDR had put together a remarkable team of rivals. The Secretary of War was a Republican. And Navy Secretary Knox had run against him as the Republican Vice President in 1936. But they all shared a deep commitment to defending democracy.

FDR was almost overcome with emotion as he described the destruction of his cherished battleships and the massive loss of life. Then he read them his proposed speech. Hull and Stimson immediately objected and a bitter debate erupted. They put forth a 17 page speech that described, blow by blow, all of the Japanese transgressions of the past decade.  The President flatly rejected their arguments, but as they became increasingly insistent, FDR finally agreed to review their speech to end the discussion. Based on the complete lack of editing notes it is unlikely FDR ever read it.

The President then faced his most difficult task. Imagine the scene. Its 9:30 pm. Its been an exhausting day. President Roosevelt in the Oval Study, surrounded by a bi-partisan group of congressional leaders. They had heard about the attack but knew very little of the details. Some were bitter opponents of FDR. As he delivered the latest details of the attack, they gasped. Some questioned why the fleet had been caught unprepared. There was no good answer for that. But even at that moment, he showed no fear, no hesitation about what needed to be done. He read them the draft of his speech and asked for their support.

Vice President Henry Wallace made one suggestion that FDR included in his speech, and it was a line that generated the greatest round of applause the next day. It also summed up perfectly how the President truly felt.

“No matter how long it may take us to overcome this premeditated invasion, the American people will in their righteous might win through to absolute victory.”

FDR awoke the next morning to a phone call relaying more bad news – attacks on the Philippines, Wake Island and Midway. He met with Harry Hopkins and they made a few minor changes to the speech. The heavy painful steel braces were attached to his legs. A little after noon he was brought out to the car and driven to the Capitol. He had to make the long walk out into the chamber holding on to his son’s arm and balancing himself with his cane. Once in position, he gripped the lectern and took a deep breath.

His presentation is truly remarkable, delivered with a solemn but determined tone, and with absolute conviction in his voice. It was a clarion call, a profound statement of national values and a fierce show of determination that justice would be served. When he gets to the part where he lists the many places the Japanese have attacked it takes on the rhythm of a sermon. And when he gets to the end, he makes clear his main point:

“With confidence in our armed forces – with the unbounding determination of our people – we will gain the inevitable triumph – so help us God.”

This story is told in greater detail and with many multimedia components in the current exhibit “ Day of Infamy: 24 Hours That Changed the World” open until Dec. 31st. There is also a new education portal sponsored by AT&T available to teachers and students here. https://fdrlibrary.org/curriculum-hubs . 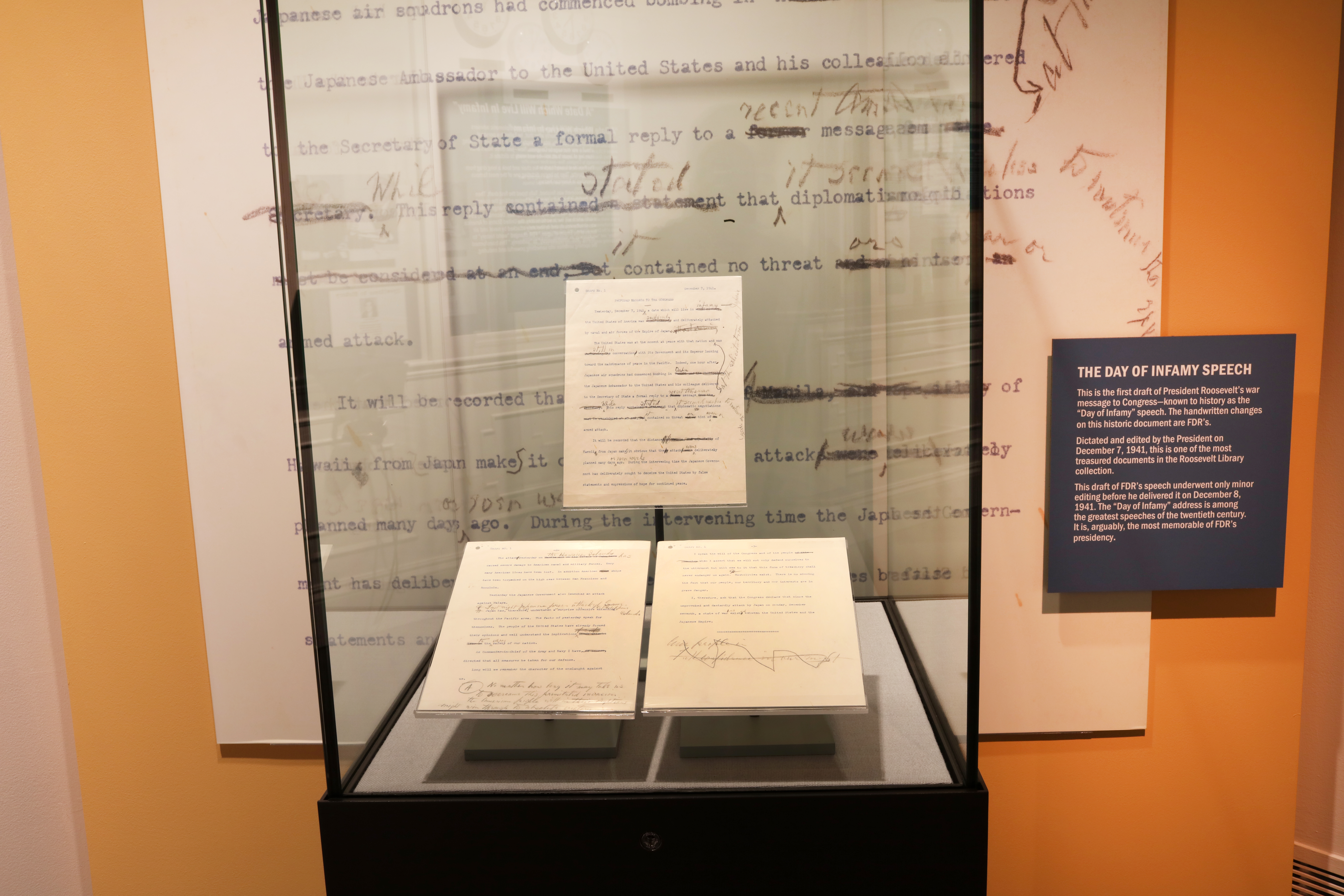