On November 19, 1939, the cornerstone for the Franklin Roosevelt Presidential Library and Museum was laid in a very public ceremony. In front of an audience of nearly 1,000 people Roosevelt spoke about his personal connection to the land on which the library was built. He described his vision for the Library: 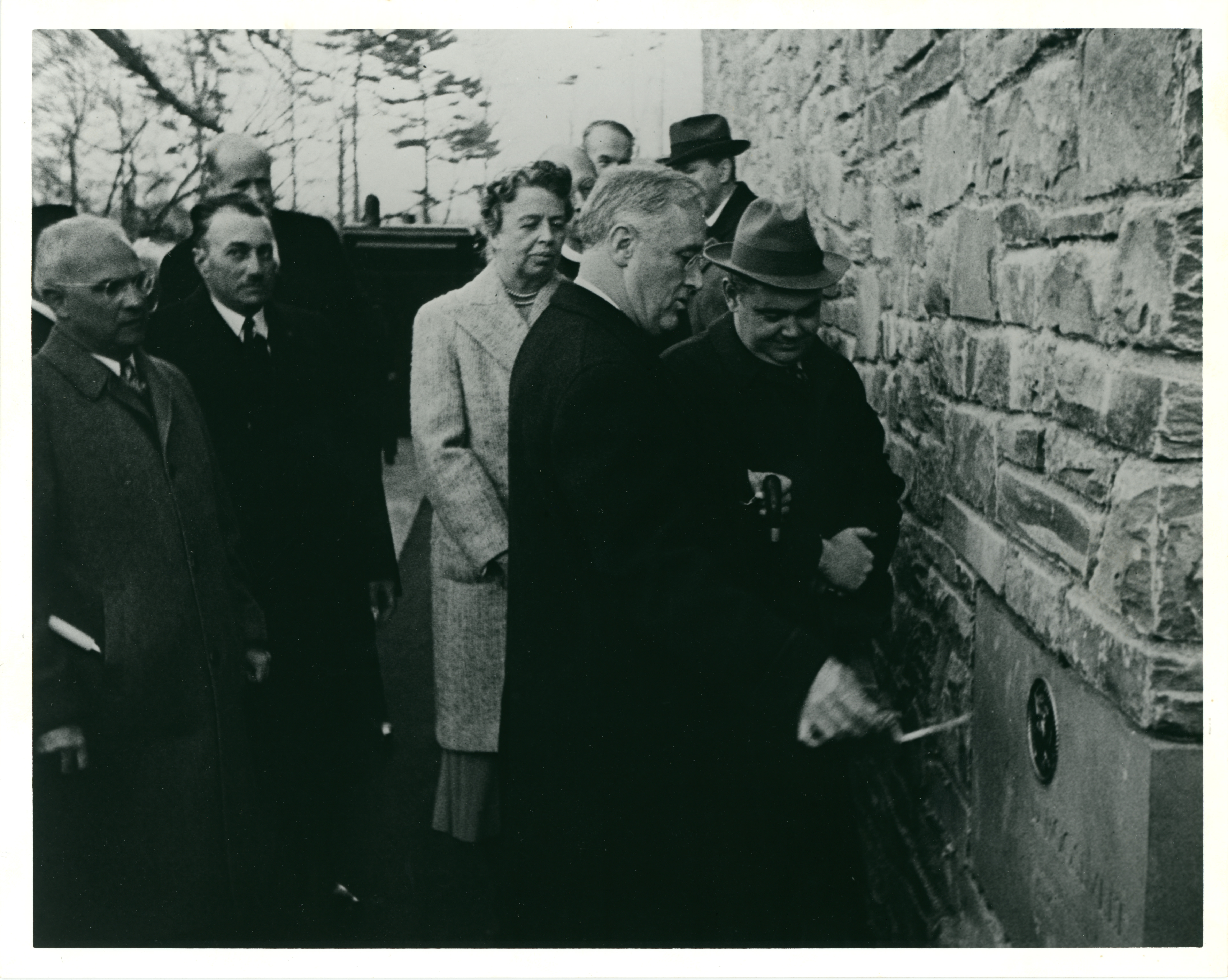 “Half a century ago a small boy took especial delight in climbing an old tree, now unhappily gone, to pick and eat ripe Seckel pears. That was one hundred feet to the west of where we stand. Just to the north he used to lie flat between the strawberry rows and eat sun warmed strawberries. In the Spring of the year, in hip rubber boots, he sailed his first toy boats in the surface water formed by the melting snows. In the Summer, with his dogs, he dug into the woodchuck holes of this same field …It has, therefore, been my personal hope that this library, and the use of it by scholars and visitors, will come to be an integral part of a country scene which the hand of man has not greatly changed since the days of the Indians who dwelt here 300 years ago …

This is a peaceful countryside, and it seems appropriate that in this time of strife we should dedicate the library to the spirit pf peace-peace for the United States and soon, we hope, peace for the world.”

The president then used a ceremonial gold trowel to spread the mortar under the cornerstone. It was an important moment for the president. He had first started drawing sketches of the Library in April, 1937, on a yellow legal pad.

He hired architect Henry Toombs in September 1937 to start work on the formal plans. Toombs later said this about the process:

“I do clearly recall his excitement on the occasion of outlining this projected Library. His mind was very busy with the divisions of materials to be included. His model ship collection [could?] be put together. The building must be air conditioned to preserve the papers. The spaces for shelving must be figured from amounts of material in storage- We must look carefully to practical requirements, a receiving room-a vault. The patron’s facilities were important. (My notes indicate Librarians room to be small-typically FDR for he always liked small rooms-They were cosy.) He was interested in that for this was his second term in office and he obviously looked forward with pleasant anticipation to the interesting job, to him, of arranging & cataloging his collection.”

It was a difficult time, with Nazi Germany wreaking havoc in Europe and Japan at war in China. Adolf Hitler invaded Russia only eight days after the Library’s dedication on June 30, 1941. Imperial Japanese forces attacked Pearl Harbor six months later. Roosevelt was focused on preparing for the war while he oversaw the library project. In fact his work on the Library provided Roosevelt respite from the extraordinary domestic and global conflicts that dominated his time at the White House.

Franklin Roosevelt said that the library project was a “matter which lies very close to my heart.” He was instrumental in designing every aspect of the building’s interior, including the designs of the stack space, the exhibit rooms, and the research room. He was deeply involved in the layout of his own study, obsessing over little details including the height of the door, the ceiling lighting fixture, and the placement of the blue-and-white Dutch tiles for the fireplace opening.

Perhaps most important to Roosevelt were the exhibits themselves. His “lifelong interest in nautical matters and American naval history,” was on full display with his ship models and maritime paintings and sketches. He personally selected local historical items for the Dutchess County room, and many objects for exhibition, including horse carriages, sleighs, and iceboats belonging to the Roosevelt family. Despite the pressures of his day job, no detail was too small for FDR.

He personally designed the document boxes for the library stacks and oversaw the placement of his naval art and model-ships.

This library was not his first building project. Beginning in the 1920s he worked on the designs for Eleanor’s home at Val-Kill, the James Roosevelt Memorial Library and his personal retreat at Top Cottage. Roosevelt was directly involved in a number of other projects in the Hudson Valley, including the U.S. post offices in Poughkeepsie, Ellenville, Rhinebeck, Wappingers Falls, and Hyde Park and three schools as well.

Between the opening of the building in 1941 and his death in 1945, Roosevelt made frequent trips to the Library, organizing and classifying his papers and collections. He worked in his carefully designed study and even broadcast several of his famous “fireside chats” from the Library. He met with American and world leaders, and developed his plans for the United Nations in his stone-walled archive.

He often worked with the assistance of his cousin and longtime companion, Margaret “Daisy” Suckley. Working with his collections had a calming influence on the president, as Suckley wrote in her diary in July 1944:

“He got into the big blue velvet chair, with a cushion behind him & his feet on the new stool. Until 5:30 he stayed there, relaxed & really resting, though we quietly went through 5 large envelopes of letters.” 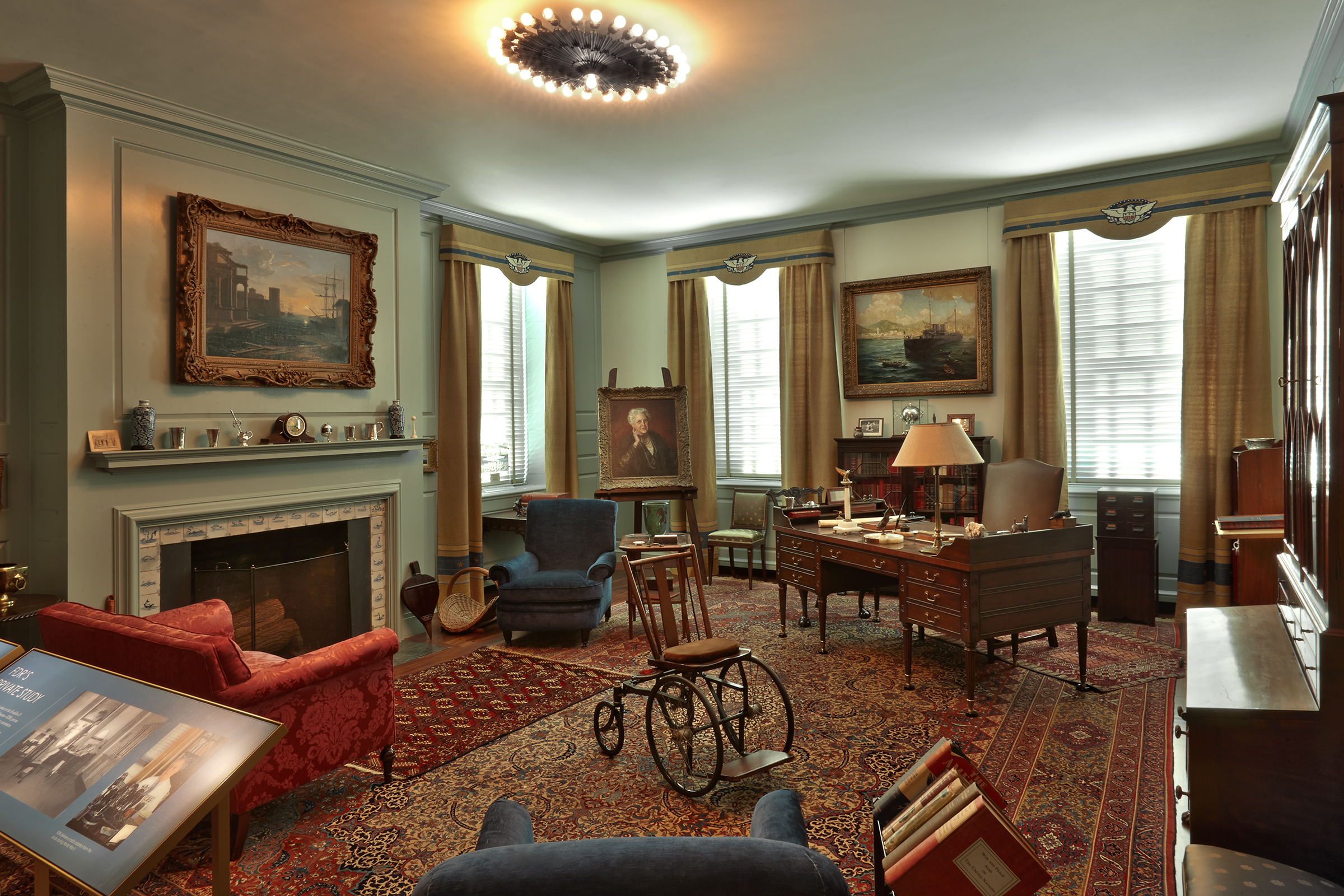 After Franklin Roosevelt died in April, 1945 Suckley reflected on Roosevelt’s legacy on the Library:

“What we must try to do is make it the kind of place the President wanted it to be-His spirit is here, & when I get a sort of helpless, ‘what’s-the-use-in-doing-anything’ feeling, I can feel his thought that no matter what happens, one must never give up-that was his motto, & the reason of his greatness. ‘The President’s room,’ I hope, will remain as it is, always-for he fixed it this way, placed the furniture, had the pictures hung, etc.”

His study remains today almost exactly as he left it. His books and art right where he wanted them. No president before him had the vision for how important presidential papers could be for future historians. But Roosevelt did, and he wanted ALL of his material to be kept together for that reason. He explained it this way:

“… it is my desire that they be kept as a whole and intact in their original condition, available to scholars of the future in one definite locality.”

The Franklin D. Roosevelt Presidential Library and Museum was a gift from a great leader to his country as an act of service. He had hoped to spend his post-presidential years comfortably ensconced in his study at the Library, organizing and cataloging his papers and collections. He had viewed the project as a contribution to research, scholarship, and the preservation of U.S. history. It launched the National Archives and Records Administration’s Presidential Library System which now serves millions of people every year, preserving and protecting presidential papers for future generations.

(This article is based on research done for the application for National Historic Landmark status for the Franklin D. Roosevelt Presidential Library and Museum.)