On Oct. 20, 1944 Gen. Douglas MacArthur waded ashore on Leyte Island in the Philippines and fulfilled his promise to return. The charismatic and dashing General was one of the most famous American military leaders in the world and his dramatic return to his beloved Philippines was a crowning achievement in his relentless battle to drive the Japanese Army out of Southwest Asia. The Universal Newsreel captured the moment.

It was a redeeming moment after the devastating losses the U.S. Army and Gen. MacArthur had endured two years earlier. Despite the early warning given when the Japanese attacked Pearl Harbor, Gen. MacArthur’s forces in the Philippines were unprepared on Dec. 8th when the Japanese Air Force attacked. They destroyed nearly 50% of the American warplanes at Clark Field, most of which were still on the ground. By January the Japanese had driven the Allied forces onto the Bataan Peninsula and the situation was desperate. Gen. MacArthur was forced to move his headquarters to the island fortress of Corregidor. As the situation deteriorated President Roosevelt ordered the General to leave for his own safety. The General and his family and closest aides were forced to escape in the middle of the night and relocate in Australia. When Gen. MacArthur arrived in Australia he made his famous declaration:

“I came through and I shall return.”

President Roosevelt awarded Gen. MacArthur the Medal of Honor for his courageous defense of the Philippines. But in fact the public support masked a deep tension between the President and his most difficult General.

The White House had asked the General to change his declaration from “I Shall Return” to
“We Shall Return” but the General refused. The animus between FDR and Gen. MacArthur goes back many years. As early as 1932, when he was still Governor of New York FDR told a close advisor that he thought Douglas MacArthur was one of the two “most dangerous men in America.”

Franklin Roosevelt and Douglas MacArthur had first met in 1916 as the nation was preparing for the First World War. MacArthur was a Major on the Army’s General Staff and FDR was the Assistant Secretary of the Navy. For the next three decades their paths would cross again and again. President Roosevelt once told MacArthur “Douglas, I think you are our best general, but I believe you would be our worst politician.”

President Roosevelt was furious when he was first told that the U.S. Far East Air Force had been caught “on the ground” when the Japanese attacked. Many military historians have judged Gen. MacArthur harshly for his lack of preparation and the subsequent defeat of Allied forces in the Philippines. Early 1942 was a very dark time for the Allies, with Nazi forces sweeping across Europe and Russia, the Japanese Navy in control of most of the Western Pacific and the British Empire under siege. While there were many reasons to blame Gen. MacArthur for the humiliating surrender of the American and British forces in Corregidor and the brutal Bataan Death March that followed, President Roosevelt applied a different strategy. Always the wise political leader, FDR understood that what the American public needed was a hero, not a scapegoat. So he promoted Gen. MacArthur to Supreme Commander of the Southwest Pacific Forces. In that role the general began preparing for his return to the Philippines. 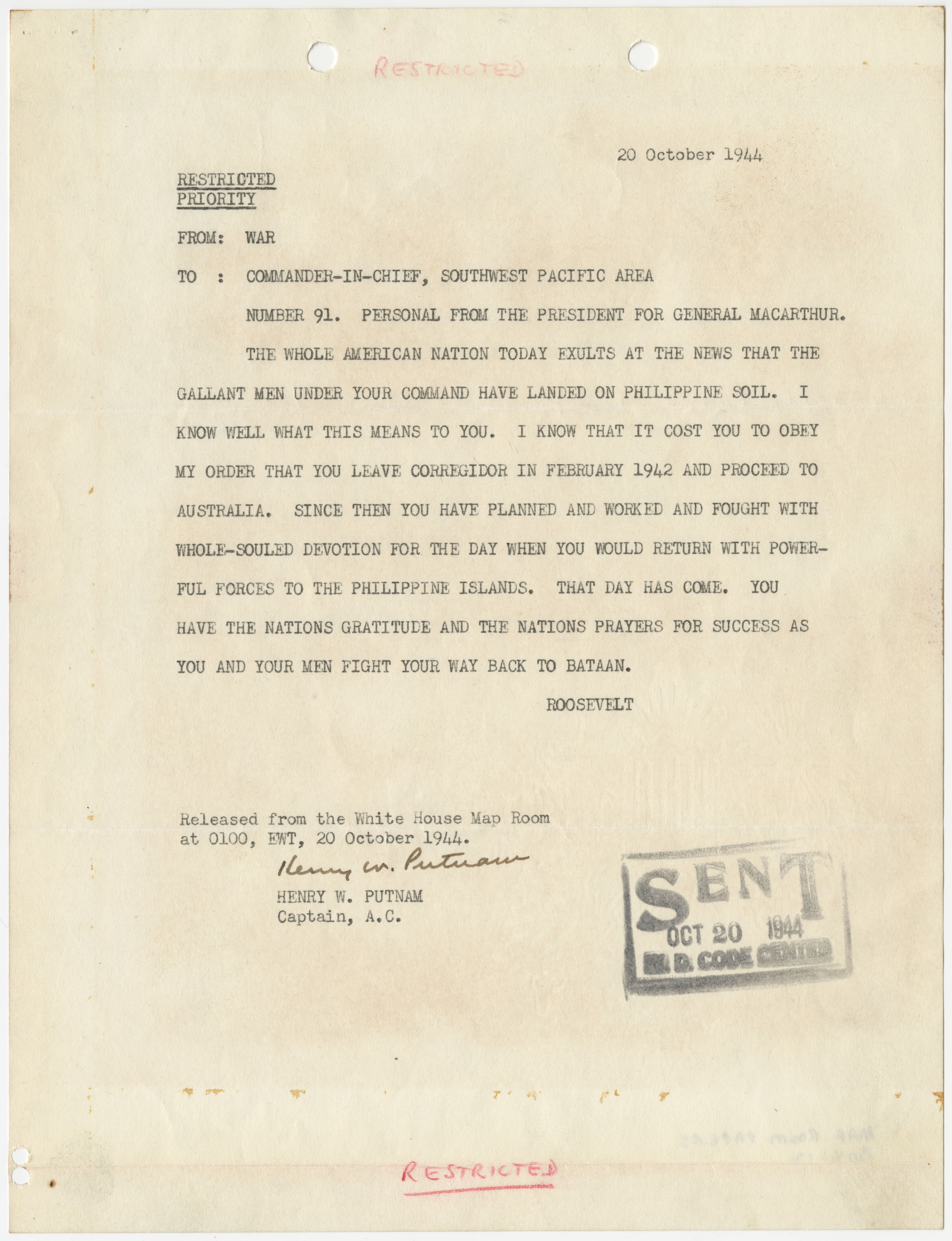 On Oct. 20th, 1944 he fulfilled his plans and stepped ashore with the whole world watching. President Roosevelt sent him this telegram congratulating him on his victory.

In fact Gen. MacArthur came ashore while the battle was still raging and against the advice of his senior staff. Always aware of his role as an historic figure, MacArthur delivered his prepared speech with, as Prime Minister Winston Churchill might say, great vigor.

“People of the Philippines: I have returned. By the grace of Almighty God our forces stand again on Philippine soil—soil consecrated in the blood of our two peoples. We have come dedicated and committed to the task of destroying every vestige of enemy control over your daily lives, and of restoring upon a foundation of indestructible strength, the liberties of your people.”

Gen. MacArthur went on to ever greater glory, and he accepted the Japanese surrender aboard the USS Missouri on Sept, 2, 1945.

By then President Roosevelt was dead, and President Harry Truman now had to manage the difficult General. Douglas MacArthur went on to become the Allies Supreme Commander in Japan. He helped rebuild the country and put in place a functioning democracy that represents one of the post war era’s greatest success stories. It would not be until the Korean War that President Truman and General MacArthur had their great confrontation. But that is a different story.